After an incredible heat wave, we are finally approaching the darker part of the year.

The smell of wet leaves and cool air only reminds us of one thing.. Huddle up with a blanket and play video games.

It is also the part of year when we usually see a huge burst of new releases.

Therefore, I present you this list of games that will keep you company through the fall of 2018.

They are in no specific order, I tried to include games in different genres so that hopefully, there is something for everyone in there.

We’ll be kicking this list off with Battlefield 5 from Dice in Sweden. As with all the other BF games, I will be getting this on release and put my life on hold for at least 2 weeks!

I was a bit disappointed with BF1, with its limited customization options and clear influence from Battlefront.

However, it seems Dice has taken our feedback seriously and are bringing back what we loved with previous titles.

Oh.. and NO LOOT CRATES! (Let’s see how long they can keep their fingers from the cookie jar 🙂 )

Set in World War 2 and running on the latest Frostbite engine.

What we’ve seen so far looks absolutely amazing. The destruction is starting to look properly procedural. If you haven’t checked out the footage from E3 I suggest you do that NOW.

As someone who missed out on the first installments. After seeing some gameplay I am finally starting to understand the hype.

It looks absolutely amazing. This is definitely going to be an awesome title for the colder days ahead!

Set in a western theme, developed by Rockstar Games, creator of the GTA games.

We join the outlaw Arthur Morgan, a member of the Van der Linde gang, right at the end of the American Old West back in 1899.

Have a look at this video, it’s going to be great.

My two favorite games of all time. Yes all time! Are finally getting remastered versions this fall.

It makes sense as they are gearing up for the release of Shenmue 3 which has been on hold for nearly 20 years. I am… mildly excited about this.. But this is not about Shenmue 3.

If you didn’t play these masterpieces back on the Dreamcast. This is your opportunity!

We follow the young Ryo Hazuki on his quest to avenge his father’s murder. The mood, the setting, the small Japanese town, the music, this is THE game to play this fall.

Shenmue is really, really good. Period. Get it.

What better to break in the fall with than our favorite couch party game. Gather up your friends and bust out the Switch for the latest Mario Party.

I haven’t played a Mario Party game for quite some time, but since we have a Switch which we bought only to play Zelda, it’s time to put it to good use again.

It’s the same idea as the other Mario Party games, but as always, Nintendo has come up with even crazier ways to utilize their strange creations with.

By connecting two Switch consoles they can interact with each other and form puzzles. Just watch the cheesy video below and you’ll see what I mean 😛

The motion controller is a big part of the game of course, and you can even play when you are out camping! As displayed in the clip from E3 :/ 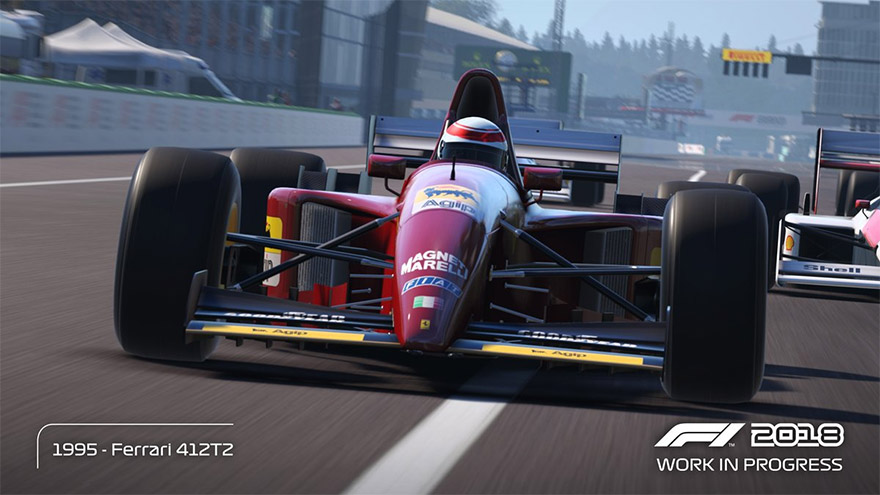 I will admit. I may have ordered the latest G29 steering wheel… And a Playseat rig.. JUST for this game.

Yes judge me, it’s going to be aawesome!

Due to lack of space I haven’t had a steering wheel since 2013, but as we’ve just moved, I just couldn’t resist.

F1 2017 got great reviews for it’s realistic feel and in depth career mode. I will definitely be glued to that seat for quite a few hours.

I love sports games where you start as the underdog and work your way up the championship, F1 2018 seems to fit the bill.

Unfortunately F1 2017 got flamed for having lots of trouble with the online mode. And as I intend on racing a lot online I am hoping they’ve been working on that part with this next installment.

Developed by codemasters (Colin McRae rally games and DiRT series), this can’t go wrong if you are into racing.

However if you do not have a steering wheel, don’t buy it. I tried the 2017 demo with a hand controller and it’s $hit.

If you don’t have a Steering Wheel but still want to race. I would suggest going with Forza Horizon 4, as it’s known for being a bit friendlier with hand controller gameplay.

Obviously not aiming for realism, instead focusing on more arcade, fun gameplay, this could be for you if you are not a serious car racing sim geek.

Last time (Horizon 3) we visited Australia and did tons of doughnuts in the outback.

This time, we are heading to the home of Top Gear, Fish and Chips the Queen. England!

Prepare to race down gnarly country roads, beetle racing on the beach and visit historic sites.. in the new McLaren Senna.

Again it’s open world so you will be able to drive wherever you want.

We also get a new feature where players can create their own race routes around the world and share online. 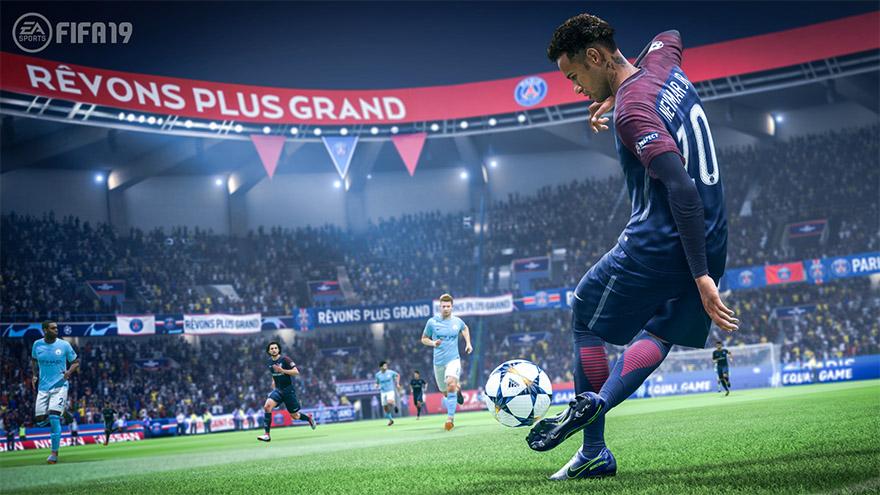 As the guy who was always on the bench back in school during soccer practice, this game might not be the obvious choice for me.

But, I got the demo (Fifa 18) on the PS4 and have found myself playing a couple of rounds against my wife every evening on the bedroom TV.

I’m surprised at how much I am enjoying it, it’s a great couch multiplayer and really gets you fired up!

I wouldn’t be surprised if I “accidentally” have Fifa 19 in my shopping cart when I purchase Red Dead 2..

They’ve used motion control on all the bigger players, so it will really look like it’s Ronaldo or Zlatan running around on the screen.. I don’t know if those two still play but you know what I mean!

With every year they tighten up the controls and add more depth to the gameplay. I have to say, I was impressed with Fifa 18 and how good it feels, with just the right amount of challenge.

Career mode will no doubt be deep and entertaining for many hours, and online play should keep you busy all through the year until Fifa 20 lands on the shelves. And then rinse and repeat. 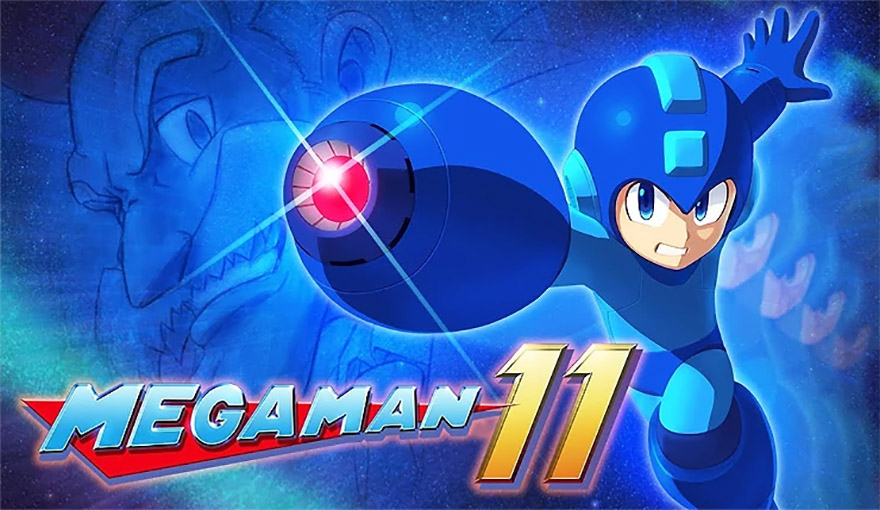 For the first time in years, Megaman looks modern and fresh again. It looks like it’s finally with the times again!

With an “indie” look, clean art style, yet staying true to the franchise, Megaman 11 looks like it’s exactly what it needs to be.

The music sounds like a modernized version of Megaman 2. I really hope they don’t screw this up.

Perhaps I am getting old, but I just never could get used to the Megaman with swords and weird helmets and whatever else..

I want Megaman with laser blasters, and upgrades from the bosses. That’s it! And it looks like Megaman 11 is delivering!

My last really enjoyable experience with our blue hero was Megaman 8 on the Playstation. Absolutely brilliant game. And MM11 is reminding me of those days.

I didn’t LOVE the first installment, and I didn’t even play “Before the Storm”. But as a die hard fan of the old click and play Adventure games this is still something I enjoy.

And as a game for the fall, I think Life is Strange 2 will be a great one to play. Calm story telling at it’s finest without too much stress involved, we can’t not have this on the list.

It will feature a whole new story line with all new characters. So if you got tired of the “hella” teenage girls like I did, this is good news.

If you are into zombie games this one might be for you. Developed by the guys that did Payday 2 are returning with an official Walking Dead game.

Although it has endured heavy criticism for not looking “next gen”, I am willing to give this one a shot. The footage that has been released is after all “work in progress”.

They’ve been working closely with Kirkman (author of the “The Walking Dead” comic books), so if he is happy, I am sure I will be too.

And Starbreeze is well known for polishing and perfecting their games long after release. If you are a Walking Dead fan, I would not turn the other way.

If you are disappointed not to see Call of Duty on this list, don’t fret. Even my grandmother knows that Call of Duty is coming out, their posters in the London Underground are bigger than the Apple iPhone posters.