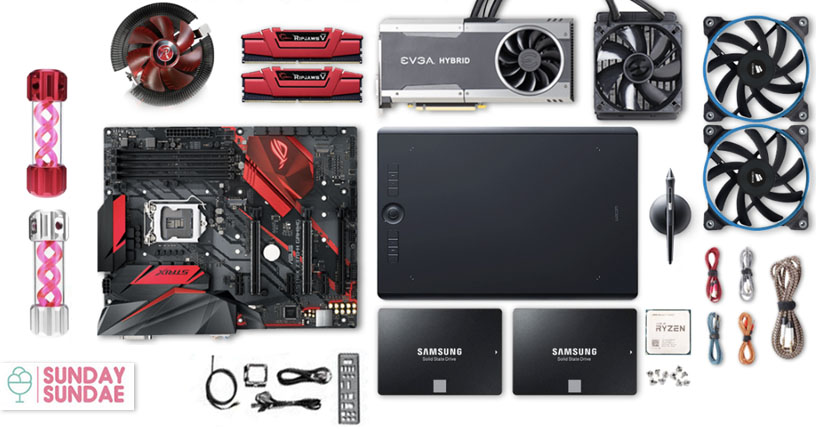 I recently bought myself a PC build, intended to be somewhat of a hybrid. I wanted it to primarily be good for making games, but also be good enough to run the latest games on the highest settings. In this article we will explore which parts I opted for in the end, along with some alternatives. If you are interested in a pure game dev computer, we’ll be looking at options for that as well.

As well as making your game, you also want to be able to play test it. If you are super serious, the optimal setup is to have two machines – one for content creation, one for play testing (and to play other games on of course). However, we will try to keep it to one machine and get the best of both worlds. And this will most certainly be enough.

Let’s start with an overview of what we want to achieve with our PC build. When thinking about making a game, we are looking at being able to run 3D programs, precompute lighting such as baking GI etc as fast as possible while keeping a reasonable temperature. We also want to make sure we can be running multiple programs at the same time without issues. Then there is the monitor,we want our colors to be displayed as accurately as possible.

Ok, enough talking, let’s get into it!

Keep on reading for more in depth, and alternative parts to fit your needs.

If you want Intel components, we have suggestions for that as well.

The heart of your machine. It is worth spending some time making this decision. It’s a significant decision.

Most games today are optimized for quad core processors. Meaning, for the optimal gaming experience, you want as many GHz per core, at a minimal of four cores. IE, an Intel i7 (4 cores, 4.2 GHz/core) will outperform an Intel Xeon E5(12 cores, 2.7GHz/core) in terms of running a game. Why? Because the game can only utilize four of the cores in the Xeon, giving you only 2.7GHz x4. While the i7 will give you 4.2GHz x4. The i7 is also just a fraction of the price compared to the Xeon.

So why would you consider a Xeon processor? Well, when looking at the game dev side of things, it looks a bit different.

3D programs such as Blender or Maya, can actually utilize all cores, making the Xeon the strongest contenter. This is mostly applicable when you are rendering, which you won’t be doing too much of when game deving. However, you will be baking lights, GI etc in your game engine. This process is very similar to rendering within 3D applications. And it can take a lot of time, so a Xeon is going to be a lot faster than the i7 here.

So, should you run out an buy a 12 core xeon? Well, as mentioned, while it will speed up your rendering times, your gaming experience will not be as great as with an i7. Not to mention the fact that a Xeon E5 will set you back $1500! So can we find a middle ground?

I personally took a leap of faith with the new release of AMD’s Ryzen chips. I decided to run with an 8 core Ryzen 7 1700x 3.4GHz. It gives us a decent GHz per core, but still grants us those extra four cores for speeding up rendering and multitasking a bit. There have been doubts about the new Ryzen chips, and for good reason, AMD has screwed up in the past. But after having owned this computer for almost a year, I am happy to say it’s been running like clockwork.

AMD has since released the second generation of their Ryzen chips, with as high speeds as 4.2GHz 8 Cores!

And since AMD brought some competition into the CPU market, Intel has responded. Now offering an 8 core i7, at a reasonable price.

If I were forced to pick an Intel processor, I would most likely opt for the 6 core i7, going for around $350. It doesn’t quite give you the oomph of an 8 core, but will definitely be enough, unless you are planning on running some really heavy renders, on a frequent basis.

Since we are going to be running long renders at times, I personally also do high fidelity renders in VRay etc which can run for hours. We want to make sure we are cooling our CPU sufficiently.

Now, before you read on and I sell you on liquid coolers. You can certainly try just using the fan that comes with your CPU and see how it does for you, it may very well be enough for your needs. It will eventually wear out, and maybe at that point, consider upgrading or just get another air cooler.

Liquid coolers are generally more popular with overclockers, normal consumers tend to run air coolers. But as we are going to put the CPU under a lot of stress during render time, I decided to go with liquid cooling.

Unless you are a liquid enthusiast, I would go for a closed loop, plug and play kit. I went with the Corsair H115.

So far I am very pleased with it, it’s quiet, works really well and always keeps my CPU at a reasonable temperature.

However, you will be fine with an air cooler as well, liquid cooling might be touching on overkill slightly. But it’s cool  😎

NOTE: Make sure you get the correct bracket for your CPU Socket. IE, Ryzen is an AM4 socket.

The GPU will be pulling the heaviest load when rendering realtime images, such as a running game. The choice for me here was pretty easy.

NVidia does offer the Quadro card which is optimized for CAD and other 3D softwares running OpenGL – it is the winner in terms of content creation. But unless you are planning on doing some serious 3D work and video editing, I would not go for the Quadro as it is more expensive and not as versatile as GeForce. During your day to day activities when making your game, a GeForce will serve you really well. And when it comes to gaming, GeForce has the upper hand.

For our PC build, the choice here for me is clear, GeForce.

I went with EVGA’s liquid cooled version of the GTX 1080ti. Again, overkill, but cool  😎

You could go with a GTX 1080, it’s plenty powerful and will still last you for a while. Personally, I am a bit of a geek and game fanatic, so I opted for the latest tech, I don’t regret it 🙂

With the new RTX 2080 around the corner, it might be worth waiting for that, but a 1080ti will last you for years.

The recommendations for running a game currently is 16GB of RAM or more.

When multitasking and using softwares that store a bunch of data in the memory such as 3D and video editing softwares, we might want to up that a bit.

The Ryzen has proven to work best when using high memory speeds, so I bought the most expensive memory sticks as these were supposed to be compatible with Ryzen at the time of release.

It did not work, I have 3200MHz memory sticks from G Skill (Ripjaws C14 16gb x2) and they are currently running at 2000MHz. It was a bit of a gamble, but with a BIOS update, I might get them to run at full speed.

Regardless, I’ve found everything to be working really well even though the memory speed is a bit lower – and would not recommend to dump your savings on memory.

The G Skill Flare X series is supposed to be specifically compatible with AMD, so if you are going to run a Ryzen build and are concerned about memory speed, give those a go.

It’s mostly when you are dealing with really large textures, or Video Editing, that you will start to run low on memory.

If you think you only need 16GB of memory for you PC build, by all means, you can always buy more later.

It really depends on what you need. If you are planning on getting 2x GPUs, make sure your motherboard chipset supports it.

Check that you get enough SATA slots for your storage needs etc.

Make sure to get WIFI if you need it.

It’s worth doing a bit of research on this just to make sure you get the support you need. If you feel like a cheaper motherboard fits all your needs, don’t overspend.

I went with the ASUS ROG Hero VI (VII is available now), mainly because it had the best bios at the time for Ryzen, the cheaper ones had some issues.

Most child issues seem to be ironed out now so no need to worry anymore.

As mentioned, just check that the features you need are on your MB and you are good to go.

I will list some suggestions below for both AMD and Intel.

Go with an SSD to run your operating system on – I also run all the softwares from the main drive. I went for a Samsung 500GB SSD.

And then an additional normal drive with tons of space for storage, 2TB should be good, but it depends on how much you need.

If you are working on something in particular, it might be worth putting the files in question on the SSD, this will speed things up a bit. But in most cases, you won’t notice much of a difference.

But for example, if you are working with a lot of heavy textures etc, it might be worth putting them temporarily on the SSD. This way they will load into the memory much quicker.

Extremely subjective topic. Just make sure that it has good cooling, airflow etc.

I went with the Corsair Carbide 600C, because I liked it 🙂

Now, obviously you need a mouse and a keyboard.. But!

If you are planning on doing some art, or sculpt in ZBrush / Blender etc, you may want to consider a tablet as well, in fact, you will need it. Sculpting or painting with a mouse is like driving without a steering wheel.

Wacom is the industry leading brand when it comes to high quality tablets. And for good reason, they are the best. I’ve tried other brands, and they are just not as good.

If you decide to go for a tablet, get a Wacom.

Here’s where you can spend an infinite amount of money. But you don’t need to. As long as the monitor has decent color accuracy, you should be good to go.

Keep in mind that, if you buy a super expensive monitor that displays colors super accurately. That doesn’t mean that other people will. So they will not be looking at what you are seeing anyways.

My recommendation is to go with a good, standard monitor. That way you are more likely to see what other people will see. And it won’t break the bank.

I like running two monitors, as it can get quite messy when running several softwares at the same time etc. But that is also a preference. I would suggest to get one at first, and if you feel like a second monitor could be useful, get another one.

Another trick here is to spend a bit more on one monitor, and then buy a cheap sh*tty one as the second monitor. You then use your better monitor for checking colors etc, while you just have utility, like sliders, settings etc, on your crappy monitor.

And that wraps this article up! I hope you found some goodies in there to help you with your project!

As always, any questions, advice or hate is always welcome in the comments 🙂